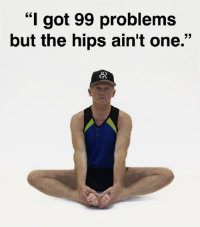 Did you know the hip joints can provide a 360 degree range of motion? If you have tightness in the hips, you’ll probably think this is a myth but I lie not. An equal amount of strength within the muscles and tendons surrounding the hip joint allow for the full circle motion, however, eight hours of sitting in a chair renders this awesome ability useless.

The relationship between the spine, hips and pelvis is complex with tightness in the muscles surrounding the hips (particularly the psoas) leading to tightened hamstrings, lower back, and even sciatica. By concentrating on strengthening and releasing the hips, we can introduce new elements within our established yoga practice to truly understand and use the incredible ability of the hip joint.

During this workshop, we will move through a specifically designed sequence to explore the range of motion within the hips and its effect on forward and back-bending. Building strength within the areas[1] contributing to open hips, alongside releasing tension in the common ‘problem spots’[2], we will move through forward bends and towards deep backbending before coming into a well-deserved relaxation.

So if you’ve ever experienced pinching, pulling, or limited range of movement within the hip joint, this workshop is for you.

This workshop will be taught by Charlene McAuley