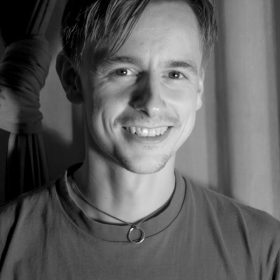 My love of yoga began whilst studying music in Cardiff in 2005.

Since 2016 I have discovered the huge benefit of almost daily Ashtanga.  Though well practiced in Hatha, Vinyasa, Iyegnar, hot yoga, Anusara, Yin, Flow, Power Yoga, I enjoy the discipline of Ashtanga occasionally mixing it up participating in experimental areas like Acro and other groups styles. My practice has been deeply committed since my first teacher training in 2014 in Australia.

I subsequently brought my training hours up to 500 with an advanced 300hr Ashtanga teacher training in Mysore in 2016.

I was an assistant teacher trainer for One Yoga’s Andrea Everingham in Fuerteventura at start 2017 which I consider to be a massive privilege and honour.

I am interested in the sense of constant evolution of all individual yoga journeys, that anyone can do it. I am particularly drawn to build upon my understanding of eastern and western anatomy, philosophy, pranayama and meditation. I am inspired by the sense of connectedness which is revealed over a yoga journey, in turn inspiring others. I am drawn towards art, philosophy, quantum physics, human rights, singing and surfing. I enjoyed a long period of travel from 2013-16 finding myself attending teachings by the Dalai Lama in Northern India and Sri Mooji at mount Sahaja.