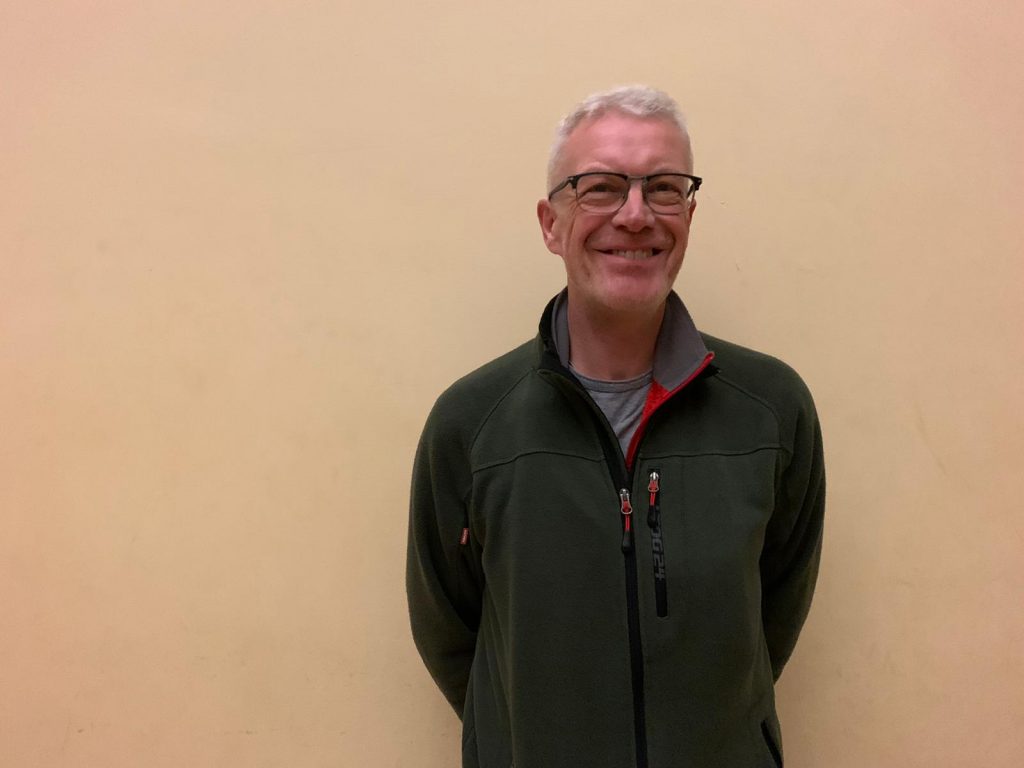 This month’s Yoga Manchester People features Dave Weston who is a regular student at Thursday evening classes at Withington with Paul Jones.

I am an honorary Manc. Three children and three stepchildren all of whom live away. Two in Sheffield, one in Leeds, one in Australia, one in Edinburgh and one in Manchester. Living with me is the family pet Heidi the mongrel who I inherited from my youngest. She’s Seventeen years old! Hobbies include gardening, cycling, motorcycling, reading and making theatre with the Royal Exchange Elders company. And of course looking after an elderly dog. Retired after working in the NHS for 40+ years as a microbiologist. Black belt Kendo.

Favourite Musicians too many to list but Richard Thompson has been a constant companion since the early ’80’s both on vinyl, CD, streaming and live. Last seen at Gawsworth Hall August 2019.

This is the hard bit. Ursula, my first wife was in remission following extensive chemo and radiotherapy and wanted to return to some sort of fitness and normality when she spotted a notice saying there was a yoga class in Heaton Moor in the hall next to the GP surgery. Feeling self-conscious she asked me to go along with her. I enjoyed it so much, thank you Matt for the nickname, I carried on going. Ursula loved it but after three years in remission the cancer returned. She carried on during more chemo and radiotherapy until the night she rolled up from her mat and left a large clump of hair behind. She died eighteen months later. Finding yoga gave me peace from the anxiety of grief and I continued regular practise with weekends in the Lake District, Wales and mysore practice in the Studio. Through Match.com I met Susan and we married a year later. For a variety of reasons my attendance at regular classes fell away until I had stopped going altogether. Then history repeated itself. Susan was diagnosed with cancer and died at home January 2019. A few months later a friend asked me to come with her to yoga at the church hall in Withington, why? that’s her story. So here I am practising regularly three times a week less flexible than I was(two knee operations to correct motorcycle injuries from when I was younger mean postures involving the knees are almost impossible). How has my practise changed? I guess it’s now more about my breathing than striving for the posture.

Superpower – Definitely breathing. Really good at savasana and enjoy the journey getting there.

Spiderman – comics from my teenage years. Who wouldn’t want to be a web slinging, wise cracking, villain thwarting superhero.

Heaven is any Bank’s pub in the Black Country circa 1972 (this is the rose tinted spectacle effect). The Royal Exchange and the original Indian Tiffin rooms in Cheadle.

If I could go back in time I would change nothing but I would quite liked to seen the Sex Pistols gig in Wolverhampton. We had queued up after finding out they were on only to be told the venue was full just three THREE from the door.