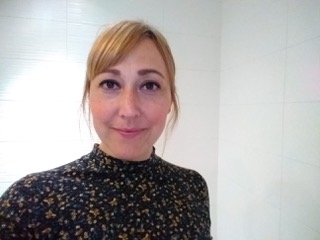 This month’s Yoga Manchester People features Yasmin who is a regular student at Thursday evening classes at Withington with Paul Jones.

My name is Yasmine and I’m from a village in Norfolk called Ormesby, I grew up surrounded by fields and spent my childhood loving nature, playing in straw bales, picking fresh peas and coming home when the sun went down.

I now live in Didsbury and have two beautiful daughters Isabel (15) and Penelope (3) and a hairy son Simon (3) the Cocker Spaniel.

I am a Florist but due to having another baby and so having much less time I am continuing with my Career in Property Management currently working at Philip James on Burton Road in Didsbury.

Ha well in my car at the minute I have a random mixture;

My other half is a Guitarist for Peter Hook and the light which I really enjoy as I have always love Joy Division and go to see them play whenever possible.

Fleetwood Mac, Suzanne Vega, The Vere, The Police are some of my favourites that have kept me company since I was in high School.

I have been practicing Yoga on and off for 17 years.

My first taste of Yoga was actually a DVD by Penelope who used to be on breakfast TV, I remember feeling such a sense of calm for once that I became addicted to the DVD and used the same one for a few years. My first actual class was around 3 years later and it was in a cold damp room in a church in Salford I only went a handful of times as it didn’t quite fit with me.

My main Yoga practice over the years has been at home and I started to use a different DVD Jane Middleton which I again became addicted to and it worked well for me.

I then Stumbled upon Paul Jones at Withington Church around 6 years ago and I can honestly say it changed me both physically and mentally for the better.  After Paul left I went back to my trusted DVD’s but then tried a class at Cavendish School which was taught my Ethna and again I was blown away and literally wanted to cry during the first class as she is just so good and welcoming, sadly she left and again I felt like the search was on again and then as if by magic a friend through the class advised she was going to a class by Paul at Withington Church, when I realised it was Paul Jones I returned and can’t express how please I am to have such a great Instructor back into my life!

I practised Pregnancy Yoga with Janine at Chorlton Irish Club for my entire second pregnancy and can honestly say I do not know how I would have got through without it! Not to mention what an amazing teach Janine is, I have her to thank for some amazing new friends for both me and Penny and through using meditation I had Penny with no drugs and refused being induced and actually went home to walk my lovely dog as I had belief in me and Penny that I was strong enough and that she was healthy enough to come when she was ready. I’m going on a bit here but just to add my waters broke to Break Out by Swing Out Sister! Ha!

I would say I found yoga because in my early 20’s I just felt like there was not enough meaning to well anything really and being in love with nature I just needed a deeper connection to everything and to be able to allow myself head space to relax and to get to know my body.

At the moment I would say my only super power is ensuring I arrive and push myself at each class!

Why, well I feel she was misunderstood in reality as she was young and unaware of the damage she caused but then also an amazing mum who just wanted the simple things in life.

I have visited her private estate in Versailles which is the most beautiful country cottage and surrounding out houses for her chickens etc… that still has the orginal walls so you can envision how quaint it once was. Marie chose to live in her own separate modest farm on the outskirts of the Palace grounds to try and live simply and peacefully with her daughter.

I have a great love for Paris.

I would want to change inhumane farming and testing on all animals.

Thanks for reading and asking!