To some people the idea of a whole weekend of Yoga with a super star Yogi like David Swenson can be quite daunting! Would a class Friday night, three times on Saturday and three times Sunday be too much? The answer to this is it wasn’t enough! It was a perfect balance of Yoga Asana with pearls of wisdom you only have after 50 years of Yoga.

David wasn’t what I was expecting, I have David’s practice manual and in his book he looks so serious. Wow I was wrong. He was hilarious. I was laughing so much, proper belly laughing. He has so many anecdotes. Some relate to things we have all thought whilst practising but we don’t want to say out loud.

One of my favourites was when he explained how when you step on the mat you know how the practice is going to go from the first lift of your arms. Some days it’s gonna be a breeze, others it feels like your arms are lead weights! And I’ve had plenty of those! He said how Pattabhi Jois (the creator of Ashtanga Yoga) would say that you only have to do 3 x Surya namaskar A (sun salutation A) and 3 Surya namaskar B (sun salutation B) and the final 3 postures if you were having a busy or tired day. He tied this in with the first session on the Friday evening which was about how to have a manageable practice for the lives many of us lead rushing from A to B. Perfect for Friday night as most people had finished work and driven to Manchester.

His individual sessions were exactly what they say on the tin. We had one class that was the entire Primary series. As a yoga teacher I liked to watch him adjust people in the class. He was open to questions and always gave great explanations along with more stories. He passed on his experience practising with Pattabhi Jois, it was a relief to hear as both a practitioner and teacher that Pattabhi Jois would not be so critical of exactly where every limb would go, allowing me to go with the flow a little more and just breathe.

Another one of my favourite stories was where prasarita padatonasana D and E went. He said Pattabhi Jois said they were not removed but students forgetting!… maybe i’ll just forget Navasana … just joking, I love boat pose 😉 . My favourite tip of the weekend: in uttita hasta padangustasana (you stand on one leg and straighten your other leg out in front of you holding your toe) actively curly your toe around your fingers OMG!!!!!! I can stand straighter and my toe doesn’t fall out of my sweaty grip.

The weekend was absolutely magic and I will be going to the next weekend he does with Yoga Manchester … and the full week he teaches afterwards. Between each class he also hung about for everyone to talk to him, ask questions, get a book signed and even have a selfies with him. I tried to play it cool but as soon as the selfie trend started I totally got in there! 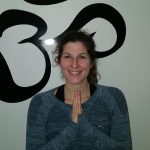 My yoga practice started in a church hall with my mum as a teen and was hit and miss depending on my mood. It became a passion when I was recommended it would help with some Lower back pain. I couldn’t go to enough…