So I have been teaching for 6 months now (and practising for nearly 10 years).  I am a beginner in the world of teaching. But I have been thinking about how much I enjoy teaching yoga beginners and why. I thought I would try and throw a short blog together to explain why it is awesome.

Don’t get me wrong. It is fun to teach avid yogis. It’s a different experience though. A different vibe (cosmic, man). It’s sort of like going to a gig of your favourite band and everyone else is on-board. They all love the band too and you are all having a good time. Its great to be with your peers and experience the yoga and all be into it. I don’t talk about energy that much, especially with beginners, but it is there and it can be ace.

For beginners it is more like getting someone into a band you like for the first time. Like you are that annoying person that loves that album, and says “OMG you have to hear it, it will change your life”. The other person is like “yeah whatever”. But they come back to you and they are like dude that album is sick, Rush are the greatest! (I have stopped short of playing Rush records in my classes so far, but watch this space for Prog-rock Yoga). Its such a great feeling to introduce someone to something cool.

You know, for all the talk of acceptance, energy and togetherness in yoga, the community has its share of cliques and elitism. Some of the culture is pretty annoying to be honest. With all the inspirational memes. The opaque waffling about the supernatural and parroting of esoteric philosophy. The marketing, aspirational designer yoga pants, and perfectly curated lives on social media (goats and beer??!). Not to mention tribalism between different schools of yoga. It gets a bit tiresome. You have to roll your eyes sometimes. This is coming from someone who is into yoga and has been doing it for years. Even I get put off by it. I remember Matt Ryan once telling me about his experiences in Mysore India and how dull it is to sit around listening to people talk about their practice and their Chakras, and how he would rather be out playing cricket in the street with the kids. I get that. You need a bit of a break or risk your head disappearing up your asana.

I’m not your typical yoga teacher though. I am not that bendy. I am tall and kind of heavy. You aren’t going to see me on instagram in a bikini with washboard abs (nobody wants to see that). More likely to find me watching horror films and playing boardgames… I’m a nerd basically. I remember my first yoga class and being scared. Thinking it would be stupid. Thinking I would look stupid. Thinking that I won’t be bendy enough (are we ever bendy enough? How bendy do you need to be?). I still remember being that guy, you know. In a lot of ways I still am and feel like a bit of an outsider. I wouldn’t want anyone else to feel that way. Or rather, I would want people to feel ok about it! If that makes sense. Thankfully I had an awesome teacher back in the day that blew my mind and made me feel welcome. Just a regular dude who does yoga. I love trying to pass that feeling on. Teaching the yoga as it was taught to me. In a down to earth, humorous way. Free of the crap and elitism that might put regular people off of coming to a class.

It is really refreshing to be in an environment that is back to basics, with beginners that have no idea and just want to do a bit of a yoga. It’s nice to get out of the yoga bubble and feel what it is really about. I think it makes you a better teacher. Keeps you grounded in reality, “keeping it real” as Matt would say. It encourages you to make the teachings relatable and accessible to normal people in their every day lives. There is a big difference between what you learn on teacher training and what you do in practice (much like anything I suppose). Especially if you did a teacher training on a fancy retreat in Thailand, and come back to teach on the damp streets of Manchester. For one, beginners make you more aware of the language you are using and have you rely less on cues like “between two panes of glass”. I think sometimes yoga is a bit of an impenetrable wall of clichés and abstract phrases. There are so many yoga cues and slogans that just sound ridiculous when you say them to a room of people who have never done yoga before. You get some pretty confused looks. Teaching beginners makes you try harder to make more relatable cues and show people how it is applicable to them and examples of how it will make them feel better.

When you try to creep in some of the more subtle philosophy and mediation elements it is important to keep it real and not get too abstract, I think. It has to make sense to people’s daily life and be approachable. I am inspired by the teachings of Zen Buddhist Brad Warner and his brand of grass roots DIY Punk Rock Zen. At the end of the day Zen is a very egalitarian practice of ‘just sitting’. A reformation of Buddhism and stripping back of the rituals, but is no less meaningful. It can be a challenge to get people to just sit and breathe. It is difficult to just sit without a goal or instructions (hey, its a challenge for me as well. Kind of the point I guess). But I love it because of how accessible and real it is. Without its reliance on music and mantras or what you believe in. It’s all about getting back to basics with people. It helps me personally see and feel the effects in myself. A practical way-out of the often esoteric and abstract world of the avid yogi.

You get into the swing of things when you have a group of regulars each week. You have fun and feel that vibe when you are on the same page. But when someone new walks in you have to shift into a different gear and make sure what you are saying and doing makes sense again. It helps you build those student teacher relationships. It ends up teaching you to tailor the yoga to the audience and really shows how it isn’t one size fits all. It is so inspirational to have people coming back the next week and surprise you and themselves. I want to break their preconceptions like they were broken for me. It is totally the best thing about doing it. It is awesome to see people getting into it and feeling accepted and like they can be themselves. You didn’t put someone off for life. Someone thought you knew what you were talking about and enjoyed what you were on about. Week on week they start to have a bit of a laugh. They are less anxious and awkward and trying new things and walk out feeling better than they did when they came in. Even if it is just a little bit better. It feels great to pass that on to other people.

So if you are a beginner who has never been to a class before! Come along. I know I am not the only one that loves blowing minds and having my mind blown. It will most definitely help bring us as teachers back down to earth and try that bit harder. But it is the most rewarding thing about teaching.

Barry Norton is teaching Yoga for Runners (Wednesdays in Didsbury) & Yoga for Cyclists (Mondays in Chorlton). 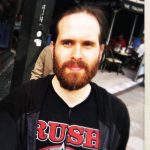 A Manchester Lad born and bred, my yoga Journey started 2009. Dealing with a knee injury from running, a physiotherapist recommended I try yoga. I was always running, swimming and weightlifting, but I had never done yoga before. I went to Matt Ryan's Yoga…