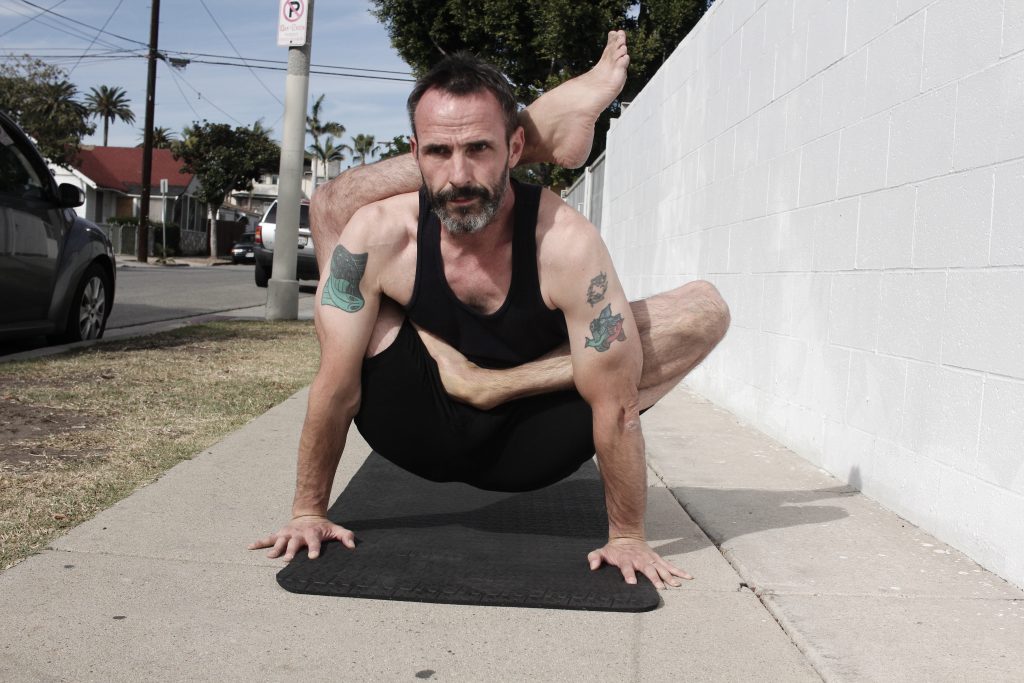 It’s coming up to 20 years that I’ve been jumping around this rectangle shaped sticky blue mat and although the practice doesn’t change (as in the format of the Ashtanga Yoga sequences), my mind and my body certainly have. There’s definitely more aches and pains going on that seem to have appeared as I’ve got older and perhaps my intensity isn’t what it used to be – some days I used to practice primary and intermediate sequences together just for fun and this this was on days when I wasn’t sweating it out through third and half of the fourth series! I was pretty dedicated. I would say however that my attitude and respect towards the Ashtanga practice glows ever brighter – it remains a beacon of light, a sanctuary for my sanity.

I think one of the major benefits of getting older as a teacher is that I’m able to be of more use to students. I’ve been using my body as an Ashtanga laboratory for my whole yoga life and I’ve had some interesting results which I’m able to refer to when I’m passing on info to folk who come to my classes. That being said I don’t have a magic wand. I’ve not yet managed to develop the Yogic Super Power of seeing inside both your mind and body ( I’ll announce it directly into your minds when I do) but I’m sure I can give a pretty good account of what might be happening when someone has a problem.

Last month Yoga Manchester hosted a weekend workshop with David Williams – David is a (very) old school Ashtanga Yoga teacher – he was one of the first students ever to go to Mysore in the seventies. David’s main teaching is ‘If it hurts you’re doing it wrong’, which as a statement to adhere to in your practice makes a lot of (common) sense but I do think it only tells half the story. Just last week I came across a blog by another Ashtanga teacher who in a rather academic convoluted way ( I needed a thesaurus , a dictionary and a ‘phone a friend’ option to make sense of what he was saying) was basically reporting ‘Oh yes this is Ashtanga and there will be pain and if ya don’t like it then sling your hook and go find another practice’! For me this particular blog gave a more rounded picture of Ashtanga  – Ashtanga Yoga is probably the most ‘physical’ of all the asana disciplines out there in the yoga market place – it can be bloody hard work but as the saying goes ‘I never said it would be easy , I said it would be worth it’. It is physically , mentally and spiritually (if you’re that way inclined)  transformative . It takes your mind and body and gives them both a ‘damn good thrashing’* and the results are rather fantabulous. Yes there’s going to be a level of pain involved (aches and pains coming from the practice subtlety and not subtlety re-aligning your skeletal system ,purifying the internal organs and helping to calm the mind ) but I do say to students that they need to take responsibility for how they manage that pain and a good teacher can help with this. If an injury happens and keeps happening because of either a lack of common sense or maybe because some teacher has ill advised to keep practicing through the pain barrier then the student must take responsibility for this. What’s that famous quote about the definition of stupidity…

Doing the same thing over and over again and expecting different results.

This quote is perfect for some students of Ashtanga Yoga and their injuries – I know because I’ve been caught out by it countless times.

All students have to learn the very difficult practice of letting go of the desire to do postures in a certain way e.g the ability to tell the ego to ‘do one’** when it says you must keep putting your leg into half lotus despite it creating massive amounts of discomfort. I know this is the case as I have plenty of test results from my lab which say it took me a whole while to take responsibility away from my ego. As one Ashtanga teacher says, it’s not ‘if’ when it comes to modifying your practice and postures but ‘when’.

Just recently I was re-reading the introduction of Matthew Sweeney’s As It Is Ashtanga Yoga book which in my opinion should be read by every Ashtanga Yoga practitioner on the planet. The 34 or so pages of the intro form the most intelligent, articulate and coherent writing (that I can only ever dream of emulating) on the Ashtanga Yoga practice – go seek it out. In a particular section Matthew talks about the problematic nature of the various ‘tiered’ sequences in Ashtanga Yoga i.e. primary series, intermediate, advanced etc – which can play into the hands of the ego of most people as one starts to practice with an eye on ‘progressing’ in asana as though that equates with some kind of ‘personal development’ (as Matthew says). And I totally get that, as I got caught up in that tangled web too. But pushing and forcing and practicing without common sense will inevitably end up in injury, like 100% of the time. Just lately I have stepped back from the advanced sequences and have just been practicing the primary series with an attitude of deep respect and reverence for Ashtanga – over the years this attitude has been developed which allows me to find joy and peace even in just practicing Surya Namaskar A – I find new experiences in my practice in postures that I have been doing for years – it never ever seems lifeless or boring. It feels like the practice is a fine wine that just gets better with (my) age.