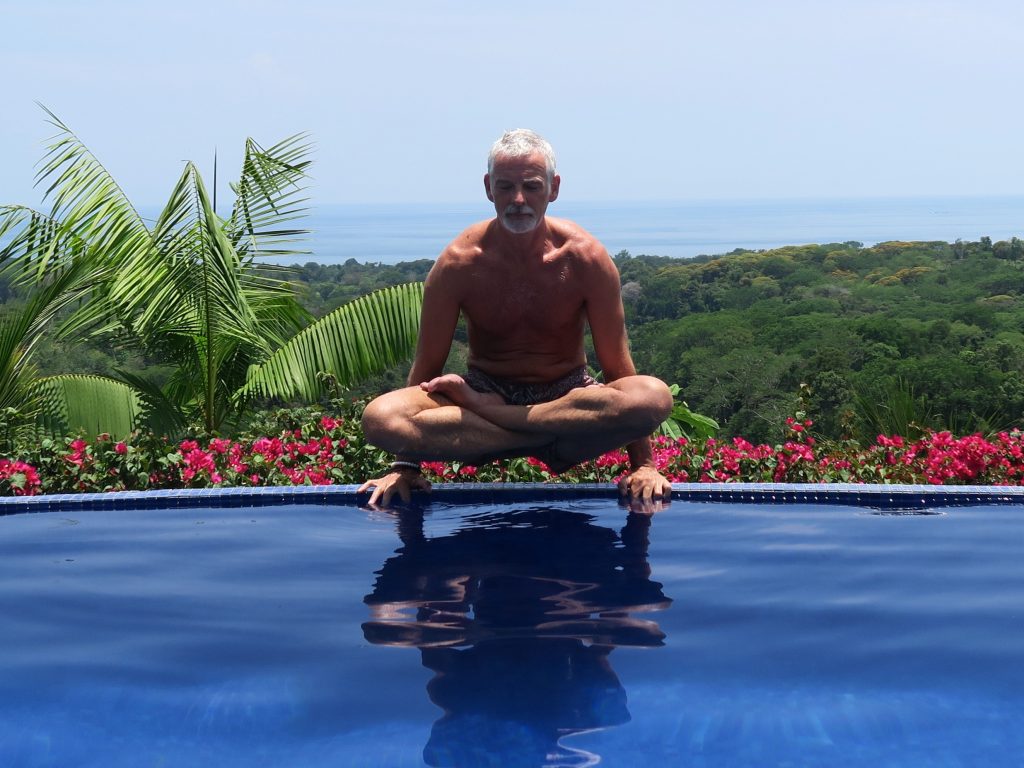 This month’s Yoga Manchester People blog features Kieron James. Kieron has been a Yoga Manchester regular for over 10 years, he has just set up Wonderful.org– for more info see below ..

I’m Kieron. I grew up in Glossop, travelled a bit, married a Spaniard, travelled a bit more, had three children (whilst travelling) and for the last dozen or so years, we’ve made our home in South Manchester. Though I guess many would make the same claim, I’m the luckiest husband and father alive. I’m indebted to Elisa, my wife, for putting up with me for almost thirty years and immensely proud of our three grown up children, Carmen, Gabi and Dan. We also have a thirteen year old bearded collie who has the energy and vitality of a pup (I’m not bitter at all).

Deep house. That may be a massive yawn for some people, but as a hobbyist producer with a handful of signed releases and as a bedroom DJ, deep house music is what I really enjoy creating and mixing. This means I find myself listening to a lot of deep stuff for inspiration, because I love the talent of the genre’s producers. That said, I do try to make sure that firing up iTunes, SoundCloud or Mixcloud doesn’t always feel like a busman’s holiday, so I’ll often mix things up with some 80s classics – invariably electronic though.

A conversation across a checkout conveyor belt. Really. A guy I’d got chatting with when picking up my lunch from the supermarket suggested going to his yoga class when I mentioned I was running at the weekend. He thought it’d be good for tight hamstrings. I thought it’d be a breeze. Guess who was right. Completely beaten up after 45 minutes, I was sold. After a few weeks, I attended my first workshop (with equal naivety and enthusiasm) – a weekend with Danny Paradise hosted by Yoga Manchester. Whilst the whole thing was pretty ludicrous for someone with my (in)ability, I was astonished at how welcoming and patient everybody was – both with my silly questions and unyielding joints. Undeterred, I’ve continued ever since and practice five times a week (mostly) and find that yoga offers a lovely contrast and complement to running and gym.

I love headstands to the point of boring people to death with highly predictable Instagram posts accompanied by asinine comments like “sirsasana on the beach,” or “upside down you turn me.” Well, it’s more fun than packing a teddy to snap in exotic locations – at least for me. The irony of reading all that stuff about the calming benefits of inversions when I was spending so much time crashing to the floor is not lost on me. I also love utpluthih – as long as I’ve been using the nee-jis Matt supplied beforehand.

I’d love to be Top Cat, but the truth is, I’m much more Benny the Ball (or even Officer Dibble). Undoubtedly my favourite cartoon series, I will hold a very deep grudge against the building society which has hijacked my childhood [I’m rolling out my mat and taking 10 deep breaths after acknowledging this].

Verona. We celebrated our tenth wedding anniversary there and have been back every year since. We even stay in the same hotel room. We do love to travel further afield, but this holiday is a constant we’re unlikely to give up. There’s something immediately comforting about arriving at the same place, visiting the same restaurant, being welcomed by the same people. The old part of the city is beautiful and though we tramp a few familiar streets year in, year out, we simply love it.

“Despacito” – There you go, by the time I’d typed the last syllable, it’s rattling around in my head with a promise not to leave until the day’s out. And now it’s in yours too. (You’re welcome.) I’ve absolutely nothing against the 5 billion streams, or Luis Fonsa, but I dearly wish I could unhear that song.

When I hit the wonderful 50, I thought it was about time I did something useful. With access to some amazing people and IT infrastructure, we set about building an online fundraising platform which would operate as a non-profit and cover all the charges associated with raising cash for charities. Having taken part in a few running events over the years, I was frustrated (read ‘fuming’) to learn that JustGiving had deducted 5% to cover its own costs (read ‘generate enough revenue and profit to attract a £95m acquisition’) from family, friends and colleagues who had supported those fundraising runs. Their generosity was, of course, intended for the charities I was running for, rather than a profit-making intermediary.

So we created Wonderful.org. All fees associated with raising money for worthy causes are covered by our Corporate Sponsors so that charities receive every penny from donations, including Gift Aid. Nobody at Wonderful gets paid and we’re very proud to be announcing our inaugural Wonderful Week (wonderfulweek.org) with the support of footballing legend, Phil Neville, his Duracell-powered wife (she won’t mind me saying that), Julie and amazing children, Harvey and Isabella, who are running, cycling and swimming 100 miles to support their chosen charity, The Good Life Orphanage.

The Wonderful Week takes place from 2nd-10th September and the James family is also taking part (of course!) in support of The Christie.