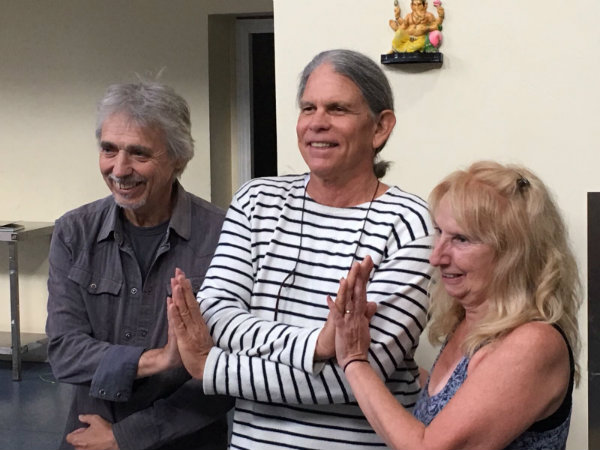 David Williams is perhaps in a unique position to offer a workshop on “Ashtanga Yoga for Life”, as he has literally spent his whole adult life dedicated to the practice. He opened with a colourful account of his introduction to Yoga at a sixties rock festival, and his subsequent journey via the “Magic Bus” to India, where he eventually came across Manju Jois practicing Ashtanga Yoga on a beach. After promising to bring Manju to America (somehow one day!) David went on to meet Manju’s teacher, his dad Pattabhi Jois, in Mysore around 1970 (along with Nancy Gilgoff), and became the first Western student to eventually master the entire series. Later he did manage to get Patthabi Jois to California, along with Manju, who never went back! I guess this planted the seed which eventually led to Pattabhi Jois’s version of Ashtanga Yoga now being one of the primary forms of Yoga practiced in the West.

David moved on to Hawaii, and after one final visit to Mysore to finish learning the last series, he realised he didn’t really want to teach, but to practice. So he passed his classes on to his student, David Swenson, and spent the next 18 years living in a shack by the beach concentrating on his practice. Thanks to another one time student, Danny Paradise, he has had various celebrity students, including touring with Pavarotti, which no doubt has helped keep the wolves from the door. He is now something of a celebrity himself, and his (literally) original views are very instructive and refreshing, opening up a whole new insight into to the practice.

Along with his own biography, David gave a detailed account of the story of Krishnamacharya, including eight years in a cave on Mt Kailash in Tibet learning from a reclusive Nepalese master, and the legendary Yoga Kurunta text, said to be hidden in Calcutta library. The tale went on to detail the life of Pattabhi Jois and also the interesting links with BKS Iyengar – almost an archetypal “Grand Narrative” guaranteed to inspire future generations of students.

The first two evening practice sessions were a relaxed run through elements of primary series, exactly as David initially learnt them, e.g. no standing balances.

Saturday morning’s practice put all the primary series together, and in the afternoon we ran through the Ashtanga pranayama series. The final session on Sunday morning was an equally relaxed look at second series, which David emphasised contained many postures which were no more difficult than primary series postures, just different, with more emphasis on back bending rather than forward bending.

I thought David did a great job of “demystifying” Ashtanga Yoga, pointing out that many of the changes introduced later were really for “class management” as numbers grew, rather than any deep esoteric reason. I was particularly impressed by David being brave enough to say that strong adjustments in Ashtanga Yoga are counterproductive, and Pattabhi Jois was wrong to use them, as they may cause injury without any great positive benefit. Personally I completely agree, and was encouraged to see David making this point so strongly. In my view there have been far too many people injured by teachers slavishly following a flawed approach, or, as David put it, “an experiment that went wrong”. He also made the point that Yoga insurance does not cover “hands on” malpractice!

The whole tone of David’s workshop was to focus on the joy of practice, getting into the feeling of how good it is to stretch and work the body in a relaxed and open way without getting hung up on how “good” the postures are. He emphasised the importance of daily practice, provided it was a happy relaxed approach which the body looked forward to. Also, he said a practice at a bare minimum was six sun salutations, three A, three B, Yoga mudra, deep breathing and tolasana, which would take less than thirty minutes.
Overall I found the workshop to be light-hearted, informative and highly enjoyable, and I got the impression most participants felt the same. Having worked with many Ashtanga teachers over the years, for me David Williams, together with Danny Paradise and David Swenson, are the most fun to work with and really embody the joy of the practice.

On a more serious note, I think David’s message cuts to the heart of a polarity of approach which any student would do well to recognise as early as possible, arising from the fundamental question, “why  practice Yoga”? On one hand, Yoga may be used as a method of physical and mental cultivation and control. The techniques work, and many people enjoy great benefit from this approach. The risk in my view is that this approach may easily become ego-driven, and if you practice because you feel you “should”, and the goal is always to get “better” eventually your unconscious impulses (which really runs the show) will rebel and the practice will fade; or the ego will dominate and the body will eventually get injured or burn out. Ego domination can lead to a serious, heavy practice, a narrowing of attitudes and eventually a brittle foundation prone to life denying misery. Teachers and teaching styles following this approach are likely to be pedantic, dominating and unsupportive, as David says, sadistic teachers with masochistic students – no pain no gain! On the other hand, Yoga may be used as a vehicle for self inquiry. I think the original purpose of Hatha Yoga is as a preparation for meditation and a natural starting point for self inquiry. Interestingly David seems to consider Ashtanga Yoga to be a complete meditation form in its own right, generating a continuous meditative state, with no need therefore for sitting meditation or other practices. I might beg to differ, noting that Patanjali’s Ashtanga Yoga as developed in the Yoga Sutras has little emphasis on Hatha Yoga, with asanas being just one of the eight limbs of practice, but this is a discussion for another time. The main point is the development of an approach with an emphasis on inquiry and nurturing spontaneity, not cultivation and punitive control. The hallmark of such an approach is lightness and humour – after all, this stuff is far too important to be taken seriously! The ego is unmasked as being just one element of the totality of being, and humility and surrender can lead to an expansive joyful dissolution of ego control, and a relaxed and life affirming practice. With surrender, the practice is allowed to take you wherever it leads, enjoying the trip (the downs as well as the ups) and trusting that however unexpected, this is where you need to go. In my view, Yoga is to be enjoyed, not endured, if it is to be Yoga for life. I have been practicing on and off for a long time now, being even older than David, and as Nancy Gilgoff once said, I’m terrified of what would happen if I stop! I have been fortunate enough to have had “fun” teachers, and their legacy is simple: if it’s fun, you’ll do it! 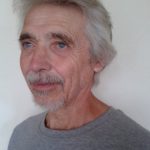 First started Yoga in 1971 in Dumfries with a french teacher, Didiere Garauger, doing what he called "Mysore Style". His teacher, JB Rishi, had studied with Pathabi Jois. Moved to Warrington in 1973, couldn't find any "Mysore Style" classes, so worked alone with "Light on Yoga". Taught night school classes for a few years during the Yoga boom of the late seventies. Stopped teaching due to work commitments, then concentrated on Karate for a time. Reconnected with Ashtanga Yoga in the late 80's with Radha Worrell and Derek Ireland at Atsitsa, a Greek holiday island, then each summer for many years at the "Practice Place" in Crete. Subsequently worked with many visiting and home based Ashtanga teachers, and on various retreats, notably David Swenson, Danny Paradise and John Scott, and once for five days with Patahbi Jois in London (along with about 300 others). Started teaching again after leaving full time work in mid 90's, until a few years back. Now just teaches occasionally on request.

Your teacher answers back with Joshua Wright