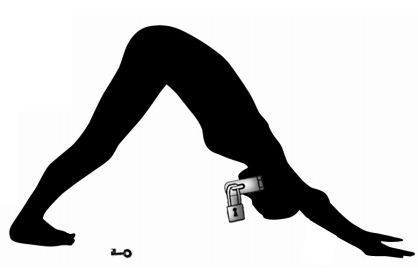 My Zen teacher Brad Warner (whose brilliant book Sit Down and Shut Up inspired the title of this blog) said once that he’s noticed that when he gives a talk about Zen loads of people show up , yet when he’s leading a ‘zazen’ meditation he’s main companions are tumble weeds. It feels a little like it’s going the same way with Yoga. Every day I’m reading yet another story on Facebook ( not that I go on Facebook) ( Ok well maybe I do but not that much) (aarrgh ok I go on it every day ok !! ) about how this teacher said this and another teacher said that – contradictions and cyber back biting aplenty. Every Woman ,Man and dog have an opinion on what Yoga is or supposed to be and if you don’t fall in with their opinion then you’re either wrong or stupid or both! It feels like there could be a 21st Century re-writing of Patanjali’s second sutra ‘Yoga is the cessation of actually doing yoga and just talking about it on Facebook instead’!

What I’m loving at the moment though is this current trend of some teachers talking about how yoga is so , so much more than postures and there’s a real spiritual profundity about it that is being missed by students. Oh and the photo of the article? Why of course it’s of the said teacher in some fancy smancy toe up asana – a lovely contradiction eh.

It’s funny how most of the teachers who can rock all the advanced postures bang on about how it’s not all about doing the advanced postures and yet at any photo opportunity they get they will rock an advanced posture. Then the flip side to that particular coin is the less physically able yoga folk will then get on their high-horse about how outraged they are that Yoga is being turned into a circus art. It’s pretty funny to watch from the side lines as an innocent bystander.

I spent what seemed like 3 days reading one particular article recently, I don’t think I even finished it as it became a little like pulling teeth and also life’s too short and of course I had to go and do my practice. In the article one teacher was calling out another teacher for basically doing something they didn’t agree with – well rather not doing something which the writer thought that they should be doing. I was like eh ? Really? This is something that annoys me a lot, I guess we all do it to some extent (myself included). We make judgements on other people and their actions, and usually that judgement is based on the fact that we wouldn’t act like that so the person must be wrong. Which is just plain daft.

Then there’s the cyber jousting he said / she said , my teacher says it’s this , well my teachers says that. It can be a real minefield for new yoga students trying to understand what they should be doing what they shouldn’t. I think it’s good to listen to opinions, points of views, and even contradictions too. But the trick is to not get too caught up in them. I’ve learnt over time that just getting on my mat answers any questions that I might have.

I came across this quote the other day

Which I thought was absolutely brilliant – the same philosophy could and should be applied to a yoga practice. In fact I’ll go as far to say that this should be lesson #1 for ALL yoga students getting on the mat for the first time.

A very similar message can be found in this cartoon… Which I also love – I found this on yes you guessed it Facebook a few months back and I’ve used the message in class plenty of times – it’s another beauty for anyone who practices yoga.

But I must admit as much as it’s about ‘the doing’ it’s only human nature to get a sense of accomplishment when we’ve finished our practice , or perhaps the first time you touch your toes or bind the hands in Marichyasana A. That very same part of our DNA that says ‘YES’ when that happens is also the very same thing that actually gets us to class in the first place , without it we’d be staying at home eating chips , looking at Facebook.