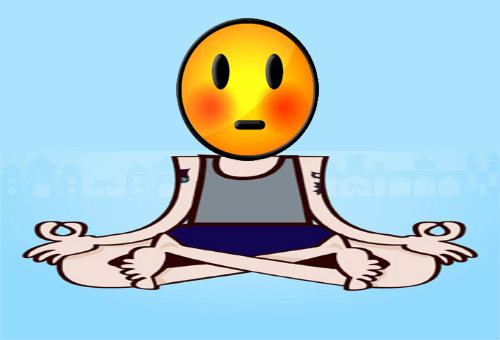 1 – I was so worried about waking up early and getting up at 5am that I didn’t sleep at all the night before. I kept tossing and turning and checking the time to make sure I didn’t over sleep. By the time the damn clock actually went off, I was exhausted and in a deep comatose state. The alarm didn’t even register on my consciousness.

2- Even after a coffee, nauli and good 10 minutes doing Pashasana practice on the throne I just couldn’t get my digestive system going. No pooping, no bandha , no practice.

3 – I put all my things out for Mysore the night before (so I could have an extra five minutes snoozing). It was all ready to go: yoga kit, change of clothes, towels, hair gel , keys, breakfast snack, coconut water etc etc. Well, during the night the cat must have found the interesting pile of goodies. He wreaked havoc and spread all my stuff around the apartment. It took me 2 hours to find my car keys which were eventually located behind the cat litter tray.

4 – I heard that the shala in Mysore used to be closed on a Saturday because that’s the day that Pattabhi Jois and his wife would go shopping. Well I know it’s Tuesday but I need to go to the Trafford Centre later and I don’t want to mess with tradition.

5 – In my dreamlike state at stupid o’clock this morning I switched on the kettle which was empty. It boiled dry causing it to explode, setting off the fire alarm and fusing the whole house. I am still waiting for the electrician to arrive.

6 – I have a terrible cold. It is not the feeling unwell that’s the problem. I always try and do a little gentle practice (honest) when I am under the weather. Rather I was worried about doing pranayama whilst having such a snotty nose. I tried to do some alternate nostril breathing and I nearly suffocated myself.

7 – My new tattoo is a bit weepy and sticking to my vest top. It’s really sore reaching up to do sun salutations. I asked my tattoo artist and they advised me not to come.

8 – During the last session I sweated so much that my mat got really slippery. I accidentally dropped into Hanumanasana much further than I intended. My groins haven’t recovered yet.

9 – I need to work on my hip flexibility, open my upper back and build up a relationship with my psoas. So I decided to warm up with a few exercises I found on YouTube before coming to practice. I started at 5am with a few inspirational demos from Kino to get me in the mood, then I came across ‘Pets interrupting yoga’ (hilarious!) and before I knew it I was watching a cat dressed as Princess Jasmine riding a Roomba disguised as a flying carpet and then it was time to go to work. I just don’t think I have time for Mysore.

10 – Last time I forgot to bring work clothes to change in to after Mysore. Immediately afterwards I had a very important meeting and presentation to give that I could not miss under any circumstances. Much to my embarrassment I had no choice but to attend in funky yoga attire. I am now suffering from Post-Traumatic Stress Disorder

11 – Saturn is moving into my moon sign (I can tell because the M56 was in gridlock again and my pitta imbalance created tension in my upper trapezius). I thought it would be too dangerous to come to yoga so I went to CrossFit instead.

12 – I’ve made it to Mysore three days in a row and now all my yoga kit is sweaty and smelly. I have been so tired that I haven’t had a chance to wash it.

13 – I ate a cheese burger yesterday and now my Yamas are all in a twist.

14 – I did my first drop back yesterday and I think I’ve awakened the Kundalini so I don’t need to come to yoga anymore.

15 – My body feels much stiffer when I practise in the morning, in comparison to the flexibility I have later in the day. I was worried that if I did intense practice too early I would overstretch and injure myself.

16 –  Yesterday in the Mysore room I saw a woman doubled over and waddling down the mat as she looked at her lady bits. It was so bizarre, I asked the teacher what she was doing and they said Titty-assana These people are taking the piss, I’m not going anymore.

17 –  My chitta vritti’s were all over the place yesterday. I need to go on a retreat, somewhere warm where I can get more flexible and drink fair-trade coconuts. Then I’ll be ready to come back to practice.

18 – I’m practising jump backs and jump throughs right now. Mysore made me so tired that I can’t lift up any more, so I thought I’d have a day off to recuperate.

19 –  I’m trying to balance my gunas. I just couldn’t bind in Mari D yesterday and I’ve been able to do it for three weeks solid. What’s wrong with me? I felt so rajas. When my alarm went off this morning I felt that it was best to meditate upon my current tamasic state. I think that if I balance my energies in this way I’ll be feeling more sattvic by the end of Friday.

20 – Sorry teach my heart was feeling rajastic but the nerve fibres in my buttocks were in a perpetual state of tamas. My Physio did say my gluteus medius muscles were under-active. I’ve been on a Sanskrit course and it looks like I’ve got a severe case of Tamassic buttocks ( which loosely translates as ” I can’t get my arse out of bed” )

Thanks to Matt Joslin and Marie Harris.