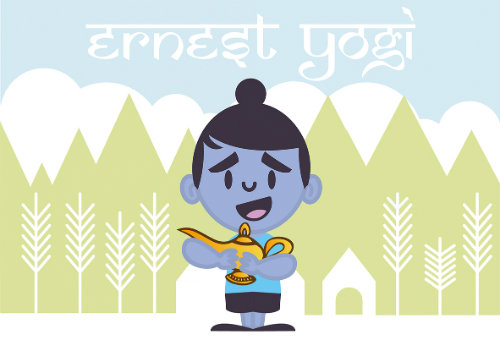 Once upon a time in the North-West of somewhere there was a young man called Ernest Yogi, and despite Ernest having the world at his feet he would walk around town with a permanent rain cloud above his head. He felt that he had more problems than anyone else in the world.

One day whilst pounding the pavements of Ancoats on the way to a yoga class he chanced upon a very beautiful golden lamp…a Magic Lamp no less. ( Ok you’ll need to suspend your belief here about the chance of finding a magic lamp on a pavement in Ancoats, but for the sake of continuity of the story just go with it for now) Our young depressed hero picked the lamp up and gave it a bit of a wipe as it was covered in cigarette butts and car oil and KERPOW out popped Patanjali the Genie of the Magic Lamp. Young Ernest staggered back and had to pinch himself to make sure this was all really happening and not the after effects of his medicinal ‘herbal’ cigarettes.

‘I can grant you one wish and one wish only’ Patanjali said to Ernest.

‘Oh thank-you Mr. Genie, could you please, please get rid of all my problems’ came Ernest’s reply.

Patanjali the Genie raised an eyebrow and spoke ‘Are you sure you don’t want a million pounds or a big mansion or perhaps a decent leg behind head?’

Patanjali knew that young Ernest was struggling with lots of things including poor hip flexors on the right side.

‘It’s tempting to go for a decent leg behind head, but I just want all my problems to be gone’ Ernest was firm with what he thought would make him happier.

‘So be it’ Patanjali said. ‘Ok I want you to find a big box and put all your problems in it and then meet me here at the same time tomorrow’.

(More suspension of belief necessary here about being able to put problems in a box)(Cheers).

The next day Ernest Yogi arrived at the very same spot that Patanjali the Genie had appeared, he had with him a massive box (the big wooden ones that you get from Unicorn in Chorlton) with all his problems inside. KERPOW Patanjali appeared once more out of the Magic Lamp and spoke to Ernest..

‘Ok sunny Jim follow me and let’s see if we can sort out this problem, problem’.

Ernest Yogi set off behind the Genie down the back streets of Ancoats. After 5 minutes of dodging crazy barking stray dogs and strange gaunt looking men asking to lend 50 pence for their ‘bus fare’ they arrived at a big warehouse – a warehouse big enough to fit in boxes of problems from everyone in the whole world.

‘Ok Ernest Yogi inside this big warehouse is boxes of problems from everyone in the whole world, you have exactly one hour to go inside and swap your box of problems for someone else’s’.

‘YES!’ shrieked Ernest ‘That’s absolutely brilliant, I’ll just go find David Beckham’s box or maybe even The Dalai Lamas, they’ll both be bloody empty’! And off he went into the warehouse.

Patanjali waited patiently outside and within only a few minutes the door burst open and our unhappy hero came scurrying out carrying the very same box that he went in with shouting ‘No way, no way, I’ll keep my own box of problems thanks very much’ And off he went into sunset with his own big box of problems, perhaps not weighing as heavy on his mind as he once thought.

‘Ah’ sighed Patanjali ‘That one works every time’!

Me dad (RIP) told me that story years and years ago, before I even started Yoga. The hero in his story wasn’t called Ernest Yogi and neither was the Genie called Patanjali but apart from that it’s pretty much the same way he used to tell it. Quite recently I passed it on to my own son.

Of course it’s a very simple story straight out of kinder garden, but that doesn’t lessen the power of the message. It’s hard to see the way out sometimes when we are stuck in a dark space. There’s a brilliant Eckhart Toll quote from his The Power of Now book. He says something along the lines of ‘Sometimes there doesn’t seem to be a way out, but there’s always a way through’! How pretty fricken radical is that – there’s always a way through. It’s so easy to think that people like the Dalai Lama and Posh n Becks don’t have any problems. But of course – we ALL have problems, every single one of us. The problems are not so much the problem, but how we deal with them.

So the above fable is perhaps only half the story. Ok we can acknowledge we are not alone in having problems and we can find some solace in that fact but what next. This is where my yoga practice comes in. There’s some amazing health benefits to be had from taking a regular yoga practice, including a strong fit flexible body but personally it’s the mental health benefits I’m after baby! Yes life is tough and I’ve got a ton of problems ( who hasn’t) but I do my practice and well the problems don’t exactly disappear but their firm grip on my mind becomes more like a gentle squeeze.

There’s Something about David with David Swenson