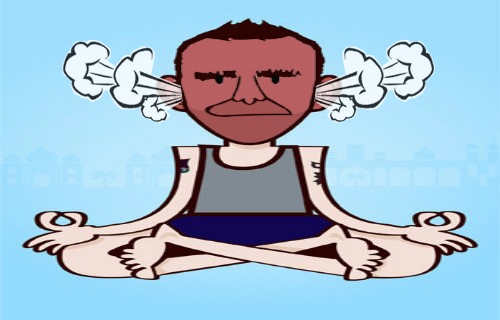 1. Do you teach Bikram Yoga?

So to some Ashtangis, Bikram Yoga is the devil’s work plain and simple and to them to even call it yoga would be tantamount to actually being the devil ! Some more relaxed Ashtanga Yoga folk might raise an eyebrow if faced with the above question and offer the questioner a polite rebuttal of ‘absolutely not’.

2. Who is this Pattabhi Jois bloke?

I must admit I think I asked this question once to one of my first teachers and I got the Ashtanga equivalent of a ‘clip round the earhole’ and told to go home and study more.

Guruji Pattabhi Jois ( RIP) was a mountain of a man and a teacher and even though I’m a karma sceptic I must have done some pretty good stuff in previous lifetimes to be amongst those Ashtangis lucky enough to have been taught personally by him in Mysore, South India.

Guruji’s teacher Krishnamacharya is usually cited as the founder of Ashtanga Yoga but we* must also say a little prayer to Pattabhi Jois and be thankful he dedicated the rest of his life to the practice and teaching of the Ashtanga method.

* This ‘we’ includes any yoga student doing any variety of vinyasa practice in the world today. Most if not all vinyasa type classes are derivatives of Ashtanga Yoga.

No this isn’t a play on words for ‘Am I sore’ as in ‘I did Ashtanga Yoga yesterday and gee am I sore today ‘.Mysore , South India is the mecca of Ashtanga Yoga – the source where it all began. The source being a tiny little room big enough for 8 students only ( but usually 10 students including yours truly would be shoe horned in at a time). Today the Sri K Pattabhi Jois Ashtanga Yoga Institute has a new home that can accommodate around 60 students in one sitting.

Thinking of going to Mysore? Read this first.

I usually answer this question/ accusation with one of my teenage son’s favourite text acronyms ‘whatevs’! Yes it’s a little aerobic , yes it’s a little bit gymnastic and yes perhaps some of it was imported from different physical disciplines from other countries.

The only worthwhile question here is does it work ? And if it does who cares about the origins of where it came from or how old it is supposed to be – the proof of the pudding is in the eating not in the second guess intellectualisation of proof of authenticity (try saying that with a fruit pastille in your mouth).

5. The Yoga Korunta is nonsense

So as legend has it, Ashtanga Yoga comes from an ancient text called Yoga Korunta that is supposedly over 5,000 years old. The text was discovered in a library in Calcutta by Krishnamacharya who decoded it and passed the teachings onto Pattabhi Jois. This ancient manuscript written on palm leaves was unfortunately eaten by ants and no longer exists, leaving some to actually doubt that it even ever existed in the first place and in that Krishnamacharya made the Korunta story up.

My two penneth worth on this is the following..

1- Never let truth get in the way of a bloody good story.

The Sound of Yoga – 3 Secrets to Pure Bliss