Tattoo: A design for life 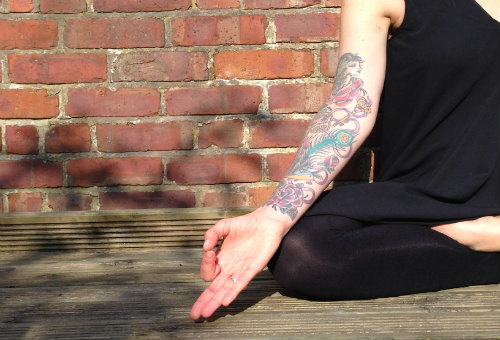 As an adolescent I had always wanted a tattoo, but they were up towards the top of the list of things not to come home with (just below boys and drugs). I can see now that my parents may have been trying to save me from making a terrible decision to have the lyrics from a Boo Radley’s song permanently inked onto my arm, or the face of Jarvis Cocker etched onto my thigh. It wasn’t until I reached the sober age of 31 that I decided I was definitely going to have one. Funnily enough, when I told my mum about it she said she fancied getting one too, so we ended up going together.

The events that prompted me to get one were embedded in a difficult period of illness and recovery, and as I began to emerge from that I found that doing what I wanted felt very important to me. I had always worried about the permanency of a tattoo and it not being the perfect design that I would love forever, but with a slightly new perspective on life, I had become much more comfortable with imperfection and uncertainty, so for me the tattoo symbolised that. I’m not telling you this because I think it’s important to have a serious reason to get a tattoo or that your tattoo should be meaningful – quite the opposite! I quickly learned from friends and tattooists I spoke to that tattoos can communicate deep personal meanings, but they can also be playful, spontaneous and simple. That playfulness was something that really inspired me when I started investigating possible tattoos.

A friend of mine who already had a few tattoos recommended I look at different tattooists work. Many tattooists have Instagram accounts where they post up completed tattoos, which gives you an idea of their style. This is a good way of identifying a tattooist you might want to work with. Some tattoo parlours have books of designs that you can choose and get tattooed, but there is much more of a culture for (and it’s advisable to) have your own idea of a design or to work with a tattooist to design something for you. This kind of bespoke tattooing is very common and it means that you get something more unique.

It is daunting getting in touch with a tattooist and going in to a tattoo parlour for the first time. But, in my experience, the people I have encountered are really friendly and helpful. For my first tattoo I wanted something relating to an oak tree. I went in to Rain City Collective in Salford – a tattoo parlour with several artists whose work I had seen on Instagram. I ended up speaking with Dan Morris and we discussed a design he could draw up. Dan recommended an oak branch with leaves, because it would allow for a nice amount of detail on the tattoo and he showed me some woodcut images. Next time I came in he had drawn it up and created a transfer, which is stuck onto your skin to check the placement of the tattoo before any ink is used. Once that was all decided, the tattooing process began.

When I had my first tattoo I had lots of questions for Dan and so when it came to writing this article, I thought why not go back to him to ask some of those questions again and relay them here? I think they make very interesting reading. Tattoos are increasingly popular with Yoga practitioners; they have become closely connected with Yoga culture – maybe they always have been? If you’re thinking about getting a tattoo, these questions and answers might help you with some of that process.

DA: How did you get in to tattooing?

DM: Just by getting tattooed myself, really. When I was young I got a lot done. Between the age of 18 and 20 I had about a third of my body tattooed.

DA: Where did that interest come from?

DM: It was probably to do with music and my friends. I had a lot of friends who were a bit older than me and were into metal and punk, and they all had tattoos.

DA: What is the tattooing process – What happens when you get tattooed?

DM: Essentially you’re pushing ink into the skin. It’s not an injection – like a needle, they’re more like pins and the skin works like a mesh. The path of the ink sits between the layers and if you don’t put it in far enough the body rejects it and your tattoo will disappear. If you put it in too far it will scab and the skin will end up in a big mess. You have to be quite skillful to actually get it in there smoothly. When you get it to the right level in the skin it will stay there, ideally, for the rest of your life.

DA: What are you working on at the moment?

If you’re using colour you can create levels by putting contrasting colours next to each other, but if you’ve only got one colour how do you create that contrast? You have to have these negative spaces in there, to create highlights. I create a lot of my shadows with cross-hatching like in old Victorian lithographs and woodcut.
DA: Where do you find inspiration when you’re drawing designs?

DM: I tend not to look at tattoos, just because I feel there are so many people out there that already use tattoos as reference. I like a lot of 16th Century German printmaking [laughs] – I try to find people that have been dead for a couple of hundred years. I tend to like using their stuff as a reference.

I think if you spend long enough looking at a painting you’ll see these little details and you think, ooh I’ll take that tiny little bit of a painting and I’ll make something from that and I’ll use that for inspiration. I like using something that’s forgotten about.

I like looking at folk art as well. I’ve done a lot of flowers recently using images from canal boats. Anything really. A visual person can look at anything and think, oh yeah that would be cool. And just trying things out, it all adds new things that feed in to your repertoire.

DA: Can you describe the relationship that happens between you and someone coming in who wants a tattoo?

DM: There are different levels of tattooing. When people come to me I try to give them as much of my experience as possible. So when people bring in a picture of someone else’s tattoo like a butterfly on a celebrity, or something, I say that I could do an exact copy of it, but I wouldn’t get anything out of it and you wouldn’t get anything out of it. You’re just getting a copy. But I could use that as inspiration and design something more original, which I’m going to be interested in and you’re going to have something more original. I know that’s not every customer, but that’s the customer that I want.

DA: What advice would you give someone who has never had a tattoo before, but wants one and wants to find some inspiration?

DM: Nowadays it’s a lot easier to get a good tattoo. There are so many good tattooists out there. Find an image that you like; it doesn’t have to be an exact thing. When you approach an artist, you can say I’ve found several images, just to give an example of the things you like. So you could say, I like the shape of this one, and I like the placement of this, and I like the texture in this. If you can convey what you mean artistically when you approach someone then they can get a better understanding of what you’re after.

Once you’ve tattooed someone a few times you get more of a feeling for that person and you understand them and it develops a level of trust, and it becomes a lot easier to understand them. It’s quite hard with first time tattoos. Essentially there’s a large amount of trust involved.

DA: I think that idea of developing a relationship with a tattooist is really important. Would you agree that people tend to get more than one tattoo?

DM: I don’t know anyone with one [laughs]. Or generally the only people with one have had a bad experience and tar all tattooists with the same brush.

DA: What’s popular at the moment? Does it move in waves?

DM: At the moment there are a lot of monochrome tattoos. You definitely notice some tattoos become the cool thing. A couple of years ago mandalas were a big thing, where everyone was getting a geometric circular design. With girls at the moment a big thing is sternum tattoos. I’ve been tattooing for 13 years and I’ve seen the trends. There was one where girls were getting tattoos on their ribs, and before that was the lower back, and then there was one where everyone was getting the side of their hands tattooed.

DA: What about cover-up tattoos?

DM: There’s different ways of doing it. I’ve got ones where I’ve put a tattoo straight over the top not paying attention to what’s underneath and that’s more of a blast over, more of a layer. I had one over here [points to arm] and now it’s on the fourth layer of tattoo [laughs]. It’s like graffiti; it’s like a history.

DA: What’s the best way to approach a tattooist?

DM: Instagram is good. Most tattooists are on it. Look to see if there’s someone’s artwork that you like, and try to organise meeting them first. I know it’s hard sometimes and a lot of people do it via email, but you will get a better feel by meeting them in person. I know I’m not the tattooist for every person on the planet, and if there’s something I’m not comfortable doing I’ll be honest and recommend someone else to go to. At the end of the day I want everyone to have an awesome tattoo.

Having had a couple of tattoos now, I find people often comment on them, asking whether they were painful, saying they really liked them, sometimes saying that tattoos aren’t ladylike (pah!). But, they are always a talking point, and they sort of grow with you, meaning different things at different times.

Dani Abulhawa is a performance artist and lecturer in performance at Sheffield Hallam University. She began yoga as part of her training for her practice-as-research PhD, and it quickly became central to her life as well as her professional work. Dani brings her Yoga practice into her work with students, and she has taught classes and workshops for Yoga Manchester. Follow her on @skeeterdani, or you can email her at daniabulhawa@gmail.com.