My Experiments with Ashtanga Yoga Part Four by Matt Ryan 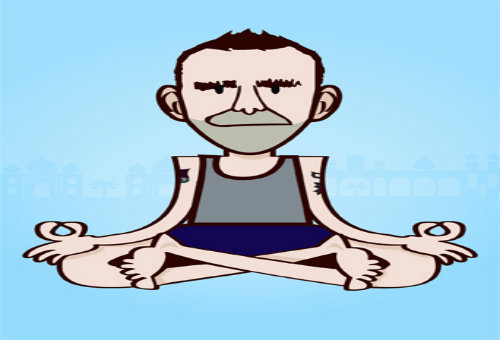 I read a blog last year by some Ashtanga dude who was admitting that he was getting too old to practice the advanced series postures. At the time I kind of laughed to myself thinking I’ve got plenty left in the tank to keep busting through the postures of 3rd and 4th series. Literally a year later and after a 2 month cold ( I kid you not) at the start of this year that was bordering on a serious bout of man flu which meant my practice consisted of blowing my nose and a very heavy dose of lying down, I was ready to throw in the advanced posture towel too.

I’m 46 now and over the last sixteen or so years of practicing Ashtanga Yoga I’ve had my fair share of physical & mental ups and downs. A tweaked hamstring here and a sore shoulder there – my injury roll call is quite an impressive list. Added to the physical aspect of practice I also still suffer daily with a complaining/mithering mind – usually when I’m watching football or driving. I always joked that if any of my students saw me at a football match they would never come to one of my classes again. (So I stopped going to matches just in case!) One thought that continually bugs me is ‘why is my mind so crazy when I do all this yoga & meditation’.

I’d like to highlight the plight of the mind and body journey with two (real) stories – both featuring the wit and wisdom of the East.

‘As long as you have a body Matthew…’

A few years back a friend recommended I go see a Chinese acupuncturist called Dr.Su after I was complaining about a tight hamstring. My friend had told me that the footballer Ryan Giggs had credited Dr.Su with sorting out his own hamstring problem that had plagued him for most of his career. So I booked an appointment and off I went to Dr.Su’s tiny office / treatment room in Nothenden in South Manchester. It was the start of a beautiful relationship.

After a couple of visits the hamstring problem had cleared up and he was now treating me for my sore wrist. Each time I went I was always complaining about one physical problem or another and Dr.Su would smile at me and offer the most simple but powerful advice on the body that I’ve ever had…

’As long as you have a body Matthew, you will always have problems’

There endeth the lesson. So get this boyfriend /girlfriend if you’ve got a body then something will go wrong at some point. The main problem is that we set up in our minds about the level of practice we need to maintain to make the whole thing worthwhile and if we get an injury of some sort which means we can’t stick to the same level of practice then that somehow invalidates what we do. Which if you sit down and think about it, is just (mind) bullshit. However we practice whether it’s all singing all dancing 10th series or maybe it’s just one measly 1 sun salutation (because your body is knackered) it’s all good, it’s all valid, it’s all practice.

This is my favourite ever true Dalai Lama story, and maybe I’m a little biased because it happened to a mate of mine.

Once upon a time in the seventies Albert (name changed to protect identity) was enjoying the good life a little too much. Both legal and illegal substances were being taken on a daily basis which resulted in the good life turning into well, not so good. Determined to sort himself out, Albert ( a practicing Buddhist) decided he would make a pilgrimage to Dharamsala in Northern India where the 14th Dalai Lama was living. Now in the 70’s Mr.D.L. was not as famous as he is now and a personal appointment with him was not outside the realms of possibility. So our friend Albert rocked up at Mr D’s gaff and asked if he could organise a private audience with the top man. After a 3 day wait he got his chance and was ushered into Mr. D’s front room. For the next hour or so Albert went into explicit detail about how messed up he was and how his life was a complete mess. Each time he finished a sentence the Dalai Lama would comment ‘I see , I see , I see’ . Finally after a couple of hours young Albert finished his tales of woe and sat back slumped in his chair, the Dalai Lama looked straight at him and said ‘ You know , my mind is crazy too’. KER BOOM – how’s about that for a curve ball of an answer. In that moment Albert realised that he was not alone in feeling crazy , granted the illegal stuff hadn’t helped but the fact that His Holiness the 14th Dalai Lama also had a ‘crazy mind’ made him feel ok.

I love this story, I tell it a lot in class. We think sometimes our mind is out of control and maybe sometimes it is but the mind certainly has a mind of its own – there’s no on or off switch. Put it this way the heart beats, the lungs breathe and the mind ‘thinks’. We would think that the Dalai Lama would have a mind that was completely peaceful and serene but this isn’t the case – his mind is crazy too. And so is mine and so is yours. But I find that when I do my Ashtanga practice my mind feels a little less crazy so I practice most days so I can enjoy being a little less bananas – it’s a no brainer.

The proof of the pudding is in the eating, so one day I decided I would do my practice first and then watch football after to see what happened – a little experiment on myself. And do you know what, I managed to get through the whole game without annoying anyone least myself.

Read the other parts of Matt Ryan’s Experiments with Ashtanga Yoga ..

The Headstand – a balanced perspective.

Yoga Rules : A rough guide to the yamas and niyamas