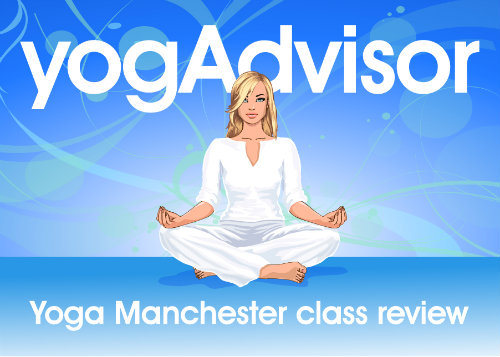 The class is held in St John’s community centre in Heaton Mersey. As I drove down the tiny street towards the community centre the blossoms were blooming, I had woken later than 6:30am and there was a free parking space right outside. I knew today was going to be a good day! The class venue is not dissimilar to my usual yoga classroom (a school hall) and it’s a nice size, with old wooden flooring and a big stage at the back. Teresa arrives early and sets out her mat so there’s no confusion as to which is the front.

Usually when I attend a yoga class I notice a few familiar faces. This class however was a totally new scene. It’s a Saturday morning so everyone’s got that relaxed weekend glow about them. There are a few first time yogis confessing ‘I can’t even touch my toes’; Teresa playfully warns them they won’t be able to feel their thighs in the morning so it won’t matter anyway.

Teresa is one of the friendliest and most welcoming people I have ever had the pleasure of practicing with. She makes every person feel like you’ve been friends with her for years, even if she’s never laid eyes on you before. She sits on her mat at the front of class as people queue to pay for the lesson. She speaks to every single person attending the class, whilst also involving those already sat on their mats. She’ll ask your name and if she doesn’t recognise you she’ll ask if you’ve ever done yoga before.

She’s serious about this practice but she doesn’t take herself too seriously. Every person needs a yoga instructor with a sense of humour; it makes those long Navasanas a lot more bearable, trust me!

The class starts with an opening mantra, prayer, chant, however you want to label it. This generally takes place at the beginning of any Ashtanga class to open the practice, to honour tradition, to shift consciousness and to bring you closer to your own higher self (yes you do have one, somewhere). It’s chanted in Sanskrit, which can be daunting for beginners but do not fear, you don’t have to join in and nobody can tell whether you’re chanting or not. Just enjoy the words.

The ambience of the class isn’t all chanting and incense, don’t be mislead by the calming start, you will have to work hard. All postures are called in Sanskrit with Teresa giving demonstrations at the front of class. Two options are provided so choose whichever you feel comfortable with; choose the one that feels the best! As you hold the posture Teresa may or may not count the breaths, she likes to mix it up and give students time to just ‘be’ in the posture.

This is a level 1 class which indicates beginners will feel comfortable taking the class, will understand the postures and will be given the support they need. This isn’t to say experienced yogis can’t benefit from the class. I’ve been practicing yoga for a little over a year now and given the choice between practising alone and practicing in a class I would always choose the class environment. I may be the first yogi to admit this (we’re all suppose to be spiritual, self-starters, aren’t we?) but sometimes its nice to roll out your mat next to another person, doing the same asana and counting the same breaths.

To give a slight indication of how challenging the class was we did some intermediate backbending and the first time yogis did it too! Yes, it’s challenging but it’s also doable. Teresa reminds you throughout the practice to overcome that little voice in your head telling you not to hold that asana, that little voice that tells you to be fearful of something or that you wouldn’t be able to do it, ‘so why bother trying?’

Overcoming that little voice telling you ‘you can’t’ will gradually begin to transfer into your everyday life, until you eventually realise ‘you can!’

I was 19 years old when I took my very first yoga class – not only because I wanted to be uber fit and bendy but because I was anxious and stressed about everything I could find to be anxious and stressed about. For a little over a year now I’ve been a student of Matt’s and each day I grow a little more obsessed with this practice. So, I obviously jumped at the chance to practice with every Yoga Manchester teacher and then write about my experiences with each. I hope one of these reviews ignites enough curiosity in you to try a class; maybe you’ll fall in love too.

When life gives you lemons, pray they are Lulu.

Ashtanga Yoga is Nothing Special (and neither are YOU) by Matt Ryan.