The 3 big questions in life by Matt Ryan.

2. Is there life after death?

3. Should Ashtanga Yoga students go to Mysore (to study at the KPJAYI)

Did you spot the ‘red herrings’ in the above questions? Was is that obvious? I like Buddha’s answer to the first two questions, he said something along the lines of “don’t twist your melon trying to prove or disprove the existence of God and life after death – it’ll probably send you doolally.” So I’ll heed his advice and try to make sense of question three only as God knows (or maybe doesn’t) I’ve been asked that particular question a million times.

I’m just back from my 8th visit to the KPJAYI (the Shala) and I now feel pretty comfortable with giving some kind of answer to question three. The place has changed over the years; physically changing in 2002 when it moved lock stock and barrel from the tiny 12 students at a time ‘Old Shala’ in Lakshmipuram to the much larger 50 students plus toilet space ‘New Shala’ in Gokulam. That was when the first murmurs of discontent started to rumble, the ‘Old Shala’ versus the ‘New Shala’ debate. I guess it was bound to happen as people always like to have a moan about something, myself included. And having studied at both shalas, my biggest moan about the old place was the two-hour daily wait to get on the mat. Still it taught me patience. Even Spiritual Awakening is subject to the laws of supply and demand, and for me my friend, I welcomed with open arms (and only a 20-30 minute wait to practice) the move to Gokulam.

When Guruji, the heartbeat of Ashtanga Yoga died in 2009, the flame was passed to his grandson Sharath. Guruji had been pretty poorly for a few years and had actually retired from teaching in 2007, but he lived upstairs at the Shala and his presence could be felt on the Shala floor even when he stopped teaching. In some ways the passing of Guruji marked a new era in Ashtanga Yoga as quite a few of the older students stopped making the annual pilgrimage to the Shala, and a ‘new generation’ of Ashtanga Yoga student was born. Like Guruji passing the Ashtanga flame onto Sharath, the student flame was passed from teachers like Richard Freeman, Tim Miller and Dena Kingsberg to the new kids on the block: Kino MacGregor, Luke Jordan and Mark Robberds. Despite the presence of some truly awe inspiring people in the Shala, people still wanted to moan; whether it was about monthly fees going up or the alleged ‘aggressive’ energy in the shala, there was always a ‘shala drama’ going down.

Having been there a few times, I have never felt this supposed aggression in students – what was that quote from Homer Simpson ‘Offence is only taken, but never given’. I guess people get too caught up in other’s people’s journeys rather than focusing on their own. Yes there is a definite energy in the room, but for me this energy is the power of the Ashtanga fire burning up egos and attitudes and transforming hearts and minds.

My latest trip to Mysore in March 2014 marked a personal ‘awakening’ in my internal and external Ashtanga journey. As mentioned above I like a good moan as much as the next person (I think it’s the human condition, to be human is to moan, I moan therefore I am,  maybe that’s what the Buddha meant in the first ‘noble truth’ not life is suffering but life is moaning). This trip, despite the heat and the Shala being busy, saw a ‘dropping off’ of the moaning, no shit. I got up I went to the Shala, I waited, I practised,  I went home – hallelujah, I finally ‘got it’.  Maybe some people ‘get it’ quicker than others. I’m pretty slow witted and it always seems to take longer for the proverbial penny to drop.

Ashtanga Yoga is a process a physical and mental journey, “a 100 year programme” as one teacher likes to call it. The problem people make when they go to the Shala is their expectation. They want it to be a certain way and then when it’s not like what they envisaged or hoped for then it’s a ‘waste of money’ or ‘I’ll never go back there’ moan. What made complete sense to me this time (I told you I was a slow learner) was it’s like the old spiritual cliche of digging a hole looking for water: you gotta dig deep baby to get there. Too many people give up after one shovel full of earth, which when you actually think about it is just plain bloody stupid.

If you’re after adjustment after adjustment then go to Freddie’s Fab Adjustment Clinic , Beach Side Hotsville. If you can be honest with yourself and want some personal transformation (this can be physical, mental and spiritual) then you got to start digging and keep digging and then dig some more until you find what you’re looking for.  I wouldn’t say that I’ve finally hit gold (am I carrying on too long with the digging analogy here?) but one thing’s for certain: I’m definitely onto something when I’m at the Shala, and that door’s open for you too as long as you can leave your bullshit at the Shala door.

Yes it’s a bit of a hassle getting there – even the booking process is a little convoluted these days, but see these kind of things not as obstacles but as part of the whole Shala process.

So in answer to the above question three YES, YES and thrice YES. In the words of Jimmy James & The Vagabonds ‘Now is the time’ – don’t delay get on t’internet and email the Shala today. 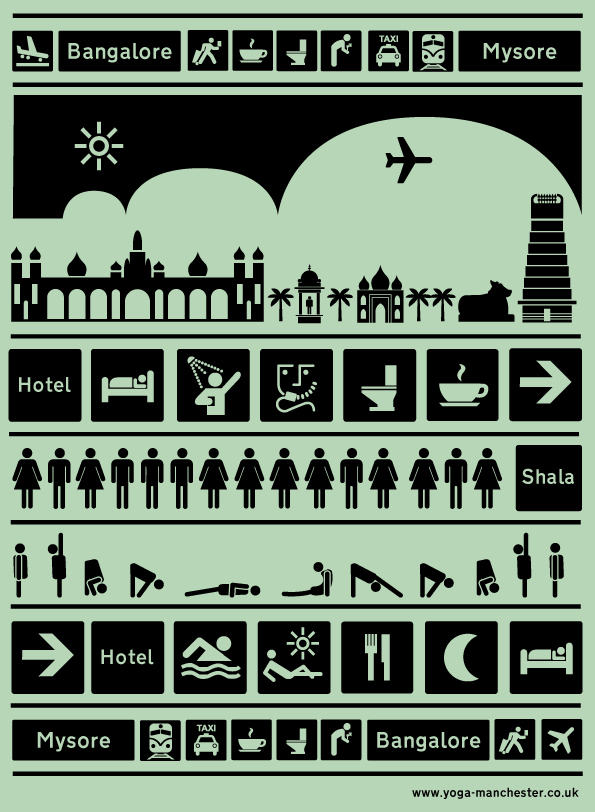