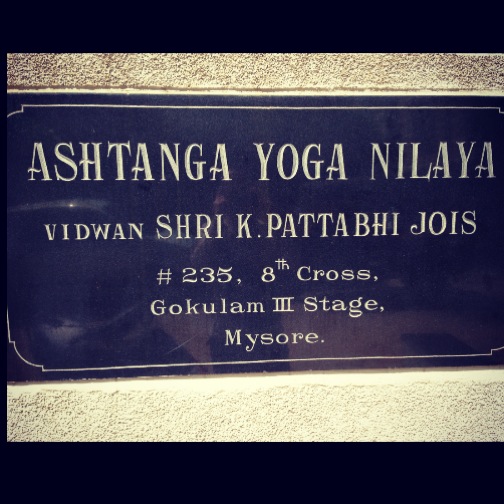 When the going gets tough, the tough get going and Sunday 9th March the going got well and truly tough at my first Intermediate (2nd series ) led class. A led class is where the teacher calls out the postures and everyone follows, with various students dropping out along the way as they reach the posture they are working up to in the sequence. Only once a student has mastered the posture are they then allowed to move on to the next one in the sequence.

During the led class it felt like some kind of karmic payback from all my students who get rather fatigued (that’s rather a polite way of saying it) at my laid back counting method, as Sharath crawled his way through the calling of the breaths in the sequence . The 5 breaths of each posture felt like at least 10 minutes and we were only into the sun salutations. Yikes!!

I set my mind on a return to bed after class and that seemed just enough an incentive to get me through right to the end.

On that Sunday afternoon (after 3 hours of 40 winks ) I got to visit Kurune Mane – the orphanage set up by Operation Shanti , the charity Yoga Manchester sponsors. I’ve been hanging out here ever since it was set up in 2008 and the kids are just amazing. It’s one of my favourite places in Mysore.

So the rest of the week has been a daily practice of intermediate and advanced A postures which leaves me absolutely cream crackered- it’s one thing doing this practice in the cool and calm of Manchester (ok the freezing cold) but doing the same in the heat and intensity of Mysore India feels ten times as hard.

5.30 am leave the house and walk to the shala

6am -8am take practice

8.15am (it takes me exactly 15 minutes to walk home from the shala) a large dose of lying down, recuperating mustering the strength to go and eat breakfast

So the rest of the day is a mixture of reading, studying, going to the pool to cool off and watching DVDs -but not always in that order.

The week ended with another led class – as it was Friday this means everyone does primary series only. As the shala is very busy Sharath has to do 3 separate led classes – I’m in the first one at 4.30 am which means getting up at 3am to meditate etc and yes of course it crosses my mind a few times that maybe I might be slightly mad. Even the 4.30am class is oversubscribed and students spill over into the men’s toilets / changing area. This is where I am – well I’m actually in the smaller area up the stairs in the toilets which seemed like a good idea as there was only one other student up there with me , until I realised this is where the mosquitoes like to hang out. Mosquito bites are like buses you get none for ages and then you get 9 all at once – I have nothing nice to say about mosquitoes – let’s leave it at that. Practicing in the upstairs of the men’s loo I can just about hear Sharath ’s voice through the door from the main Shala but every so often he’ll will walk into the toilets to make sure no-one is slacking. When he comes into the toilet it feels a little like when you go to a concert at an arena and you’re sat miles away from the stage but every now and then the lead singer walks over to the side of the stage to give your section of the crowd a little wave.

Saturday was day off and I thought I’d treat myself to an oil bath. An oil bath is the traditional practice for a Saturday in Mysore to help relieve any aches and pains (and I’ve got lots) and involves a lot of castor oil and this weird green powder you use to wash the oil off. I went from looking like a body builder getting ‘greased up’ for a competition to a cross between Shrek and the incredible hulk – not a pretty sight – just ask my wife.

So week 2 over – the going was getting tougher but ankles are now being grabbed Sharath is happy –all is good. Over and out.