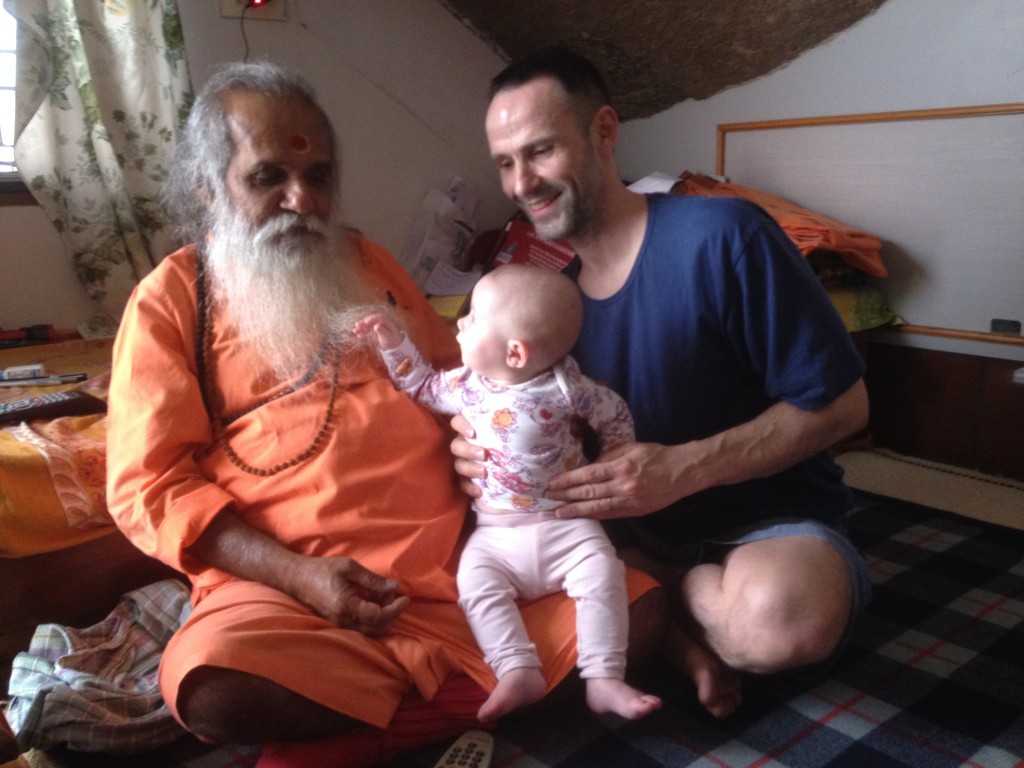 I’ve not managed to get back to Mysore since 2011 and the first thing that brings all the memories back as we walk out of the airport is the smell – a mixture of the good, the bad and the ugly – nowhere on the planet has the smell of India, and then there’s the heat. Without stating the bloody obvious it’s hot in India, and coming from the arctic North-West of Manchester it almost feels like we’ve landed on the sun.

The 3 hour taxi journey from Bangalore Airport to Mysore is the usual terrifying ordeal. The taxi driver intent on seeing just how close he can get to the car in front at 90mph, blowing his horn every 17 seconds to make our presence on the road known to every Tom, Dick and Devashree. Normally I just accept the driving protocols by closing my eyes, sitting in the back and praying to Shiva, but this time I’ve got my wife and 5 month old daughter with me so it’s a little disconcerting. Anyway we arrive in Mysore unscathed albeit with nerves still jangling from the journey.

The Shala sign up procedure has changed over the years and the busier it gets the more difficult the registering process becomes. First you have to book months in advance – and if you don’t sign up in the 1 hour window of opportunity, well, you aint getting in Mister! So with registration documents in hand I set off to the Shala to sign up for the month of March… What seems like 23 hours later amongst pushing and shoving and arguments I’m good to go baby! Start time 6.30 a.m. next day. Well, 6.30 a.m. means 6.15 a.m. shala time – the clock in the shala is set 15 mins fast I’ve never known if that’s done on purpose or not – so be warned if you ever make the journey , get there early!

Just a quick re-read of what I’ve written so far one could be asking do I actually enjoy being in India and the short answer is yes, of course I do it’s the most amazing place on earth.

The practice in the first week at the shala for anyone regardless of status and level (even for those who can levitate) is primary series only and between me and you, thank the lord it is. As  1) I feel absolutely knackered from the journey and 2) it’s a much more difficult experience practicing in these temperatures. But Friday comes and even though I have to practice in the upstairs bit of the men’s toilet during the led class all is good. Sharath seems in a good mood, represented in his sense of humour about the quality of my practice during this first week…’Why no taking ankles, Matthew’ !!!

So week 1 completed unscathed, it’s good to be back in the Mysore saddle. We even managed a day to go and visit Swamiji – where my daughter Agnes Boo was more interested in his beard than her toys (see main photo). I met Swamiji 14 years ago on my first ever visit to Mysore and we’ve been good friends ever since. In 2011 he organised my ‘Big Fat Indian Wedding’ which alongside the birth of Agnes was the most special day of my life.

We also spent a very lovely afternoon in the company of the amazing Tracy Kunichika who pretty much single handed set up the Operation Shanti charity in Mysore Check them out here and spread the word. Special shout out to my man ‘Rickshaw Ravi’ who has driven us around diligently with due care and attention to the fact there’s a 5 month old baby on the back seat.

Only In India Part 1

India is a very , very religious country. Anything and everything can be declared sacred and therefore be blessed including this young fella’s motorcycle. I guess that’s why everyone drives around like a maniac as they have had their vehicle blessed and are therefore exempt from crashing , on religious authority!