A View from the Mat: Day four of the August Mysore-style intensive 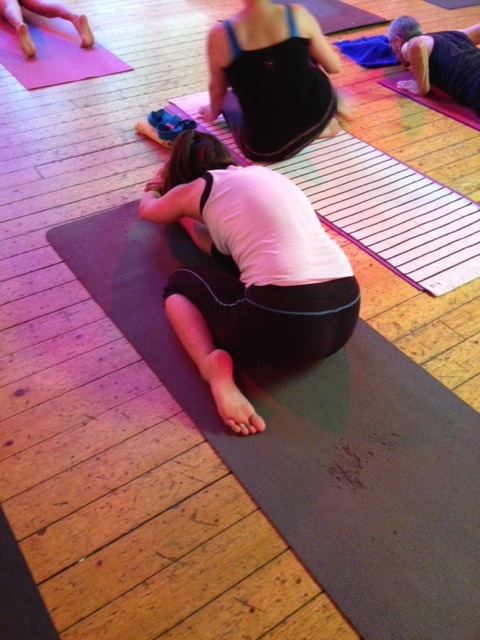 A View from the Mat is part of a series of blog posts from the perspective of our Mysore-style intensive regulars. It’s aimed at giving you a sense of what it’s like to do your Ashtanga practice in this traditional setting, early in the morning. Our August Intensive began on Monday 5th and student, Dani Abulhawa, is writing a journal entry each day.

Feeling good today, with more energy and strength; It’s funny how easily it shifts from one day to the next.

I had a couple of epiphanies today. One was about my thighs and the other about my stomach.

Whilst practising backbends, which, as I mentioned earlier in the week, I’ve been trying using a different technique so as not to further damage my lower spine, I was still finding some pinching. I asked Matt what he thought and he suggested using a block to encourage squeezing my thighs together. When I tried this, the pinching immediately left my lower spine, and the stretch began to work into the vertebrae higher up in my back. I really thought I was trying my best not to put too much pressure on my lower spine, but I’d simply not been been putting enough effort into my thighs. I found that I really have to squeeze them together much more than I imagined. It feels a bit counter-intuitive, because you’re bending backwards, so I had been thinking it was all about the openness of my spine. But, as with so many Yoga postures, the flexing of one muscle has to be supported with the strength of another; the front of my body needs to be the support for my back.

After I practised headstand, Matt asked me to try it again, but lifting my head, so as to take the weight of my body in my arms. Very tricky! But, instantly, my stomach was doing some work! And suddenly I could see very clearly how this simple variation of the headstand could really help me with so much of my practice. For example, jumping back, jumping through, Utthita Padmasana and Utpluthi, as well as Bhujapidasana.

It’s funny how long it sometimes takes for things to work themselves out, or sink in, or become known.

What I love in the intensives, is that moment when everyone is knackered (it tends to break on a Thursday), and people start releasing audible grunts and breaths of discomfort and relief. It’s not something you normally get in the average Yoga class, but that moment where everyone is working so hard they can’t help but release some of the tension. It’s lovely.

I am looking forward to Friday. It’s nice to do the Intensive, but it’s also nice to look forward to having a lie-in on Saturday, to be pleased with yourself for getting up everyday, and to reward yourself with a chippy tea.

When I got home, I spoke to Arthur about the stomach and thigh thing. He gave me a look of disdain and said, “my core strength is in tip top condition, because I jump on fences and walls. I don’t need your Yoga.” That brought the discussion around to Parkour and the fact that cats never get any credit for “their clear inspiring of such urban activities.” To which I wholeheartedly agreed.