A View from the Mat: Day one of the August Mysore-style Intensive 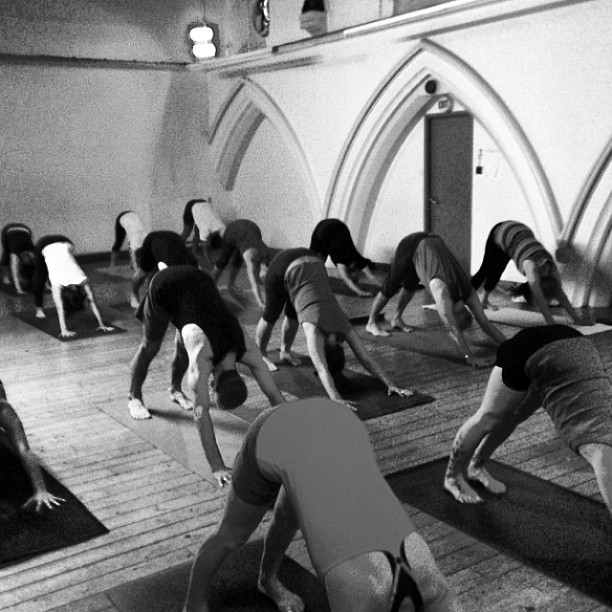 A View from the Mat is part of a series of blog posts from the perspective of our Mysore-style intensive regulars. It’s aimed at giving you a sense of what it’s like to do your Ashtanga practice in this traditional setting, early in the morning. Our August Intensive began this morning and student, Dani Abulhawa, is writing a journal entry each day. Here’s the first instalment:

What a morning. I was really looking forward to getting back to Mysore-style after last month’s practice. The week-long intensive has become such an important place for me. I spend the month trying to do my self-practice six days a week, sometimes feeling strong, supple and motivated and other times feeling weak, heavy and lethargic. When Mysore week comes back around it feels so good to be practising with other people and having Matt help me (or coerce me) with postures.
I got up at 5am, following a slightly restless sleep filled with excitement and anticipation for the morning. Arthur (the cat), likes it when I’m doing Mysore because he gets a very early breakfast.
There were lots of people; it’s nice to see some new faces. Pranayama was good; my posture felt loads better than usual.
Into Sun Salutations, I’m never sure whether to do three or five Sun Salutation B, so It depends on my mood. Today, I decided to take it easy. I started to run out of energy around Janushirasana C – probably the impending Marichyasana postures (my nemesis).  I’ve recently managed to get into Mari C relatively easily. It’s taken three years, but I’m finally opening up! Alas, Mari D is still out of reach. I’ve made my peace with that posture though now. We understand each other. God knows what’ll happen when I can bind in Mari D; got a feeling it’s not going to be fireworks and Nirvana, but maybe I can get someone to fire a party popper in my direction?
I worked my way through the rest of the seated postures getting more and more sleepy.
I’ve been focusing a lot on my backbending, because I used to rely on turning out my feet, which eventually (and inevitably) knackered my lower back. So, for the past six months or so, I’ve been doing back bends with proper alignment and it’s really transformed the openness of my spine (shortcuts never work, *sigh*). Today, instead of trying to drop back fully, which usually means folding half way and then falling the rest, I was just folding backwards very slowly and with control until I reached the edge (of the cliff); that felt really good.
During relaxation I also did a body scan on myself, which I’ve learnt from Jon Kabat-Zinn, which Matt recommended. Nearly snoozed off. When I got home I had a quick power nap with Arthur before work. More tomorrow.