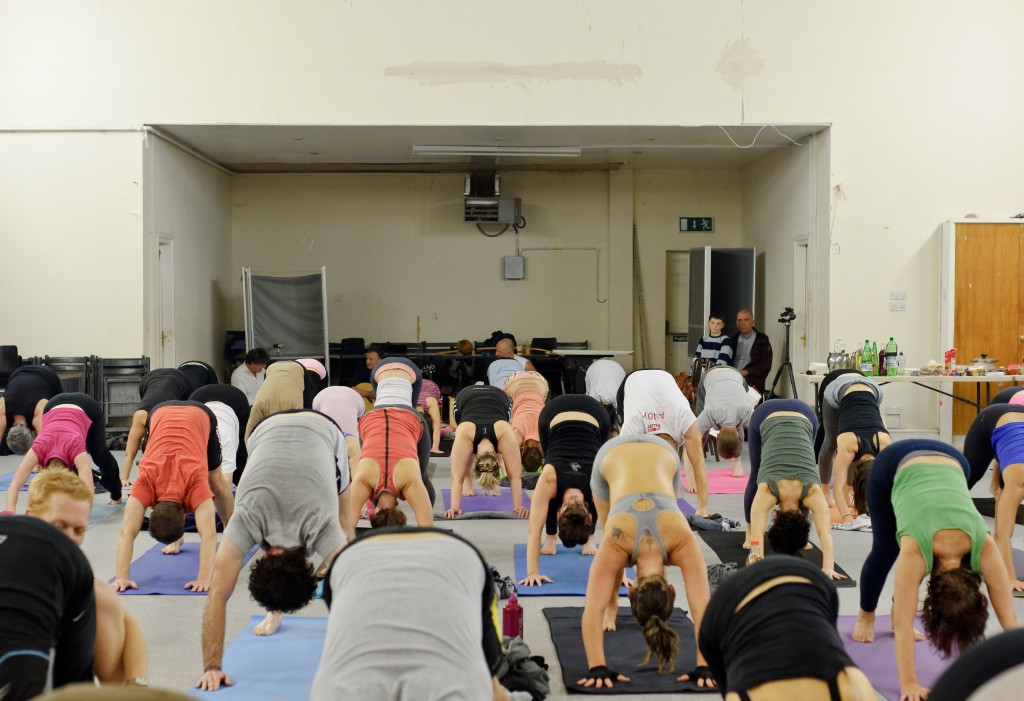 Step forward the wonderful Lynn Sbaih who is the August Manchester Yoga People . Lynn is a regular at many Yoga Manchester classes and workshops. Enjoy a small insight into Lynn’s world – and remember to leave any of your thoughts in the comments section beneath the blog. Tell us a bit about yourself

I was born in Liverpool but have never actually lived there. I have lived and worked all over the UK and the Middle East and so have, until recently always considered myself a bit of a nomad. However I have lived in Stockport for the last ten years and so now see myself as being from Stockport … sort of.

I’m a nurse by trade, and worked in the NHS, all my working life, up to late last year when I took the brave step to leave and start my own business. I have worked mostly in Accident and Emergency Units in a number of hospitals both in this country and the Middle East, and have also done some work in Intensive Care Units. In addition to this I have worked at Manchester University, for The World Health Organisation and the Department of Health.

Having left school at 16 years, I have also completed a Bsc (Hons), MPhil and Phd, all part time, along the way. Having started my life as a nurse I left as a senior operational manager and am the owner of Bluebird Care (Tameside). I have a growing team of care workers who provide home care services for anyone who needs support to remain independent in their own home.

I have always had sport or activity related hobbies, the gym, swimming, running basically anything that meant I did not have to sit down so to now to love doing yoga is quite a mindset change for me … but more about that later…

What are you currently listening to?

I only listen to music with other people. Usually in public places! This means I like anything I can dance to, usually with other people. Quite a few years ago I discovered salsa and became quite an addict … again another activity that stopped me sitting down and I love the music. My tastes in music are many as long as it has a tune and I am particularly into anything from the 60s at the moment… but that could change at any time. My favorite radio station is Key 103 for leisure and Radio 4 The Morning Programme when I need to catch up with current affairs.

I have now been practicing for two years. I go to two classes a week, three if I can manage and do a ten-minute self-practice six days a week. In addition to this I also now do meditation each day after attending a fantastic workshop with Brad Warner. My next yoga goal is to attend an early morning Mysore week.

My favorite posture at the moment is the forward bend. This is a posture that I have achieved over a period of time and so it has gone from one that I found hard to one I now enjoy. I always have the intention to focus and challenge myself before each class and mostly achieve this. I enjoy the relaxation at the end of each class as I still get a sense of having accomplished completing a class and taking myself just that little bit further into some of the postures. I am now much more flexible but still have tight shoulders. My ambition is to be able to headstand and when achieve this I am going to throw a big party!

If I had to describe myself in terms of a character in a cartoon it would be the Road Runner; the character that is seen running, at top speed, along winding roads followed by a stream of dust. The Road Runner sums up the speed of movement of thoughts in my head at any one time, on many occasions. Luckily both yoga and meditation have got me to slow down and focus, particularly on my breathing but my head is still able to accommodate several hundred thoughts all wizzing round in a second.

Where in Manchester is heaven?

There are a few times and places I would like to go if I was able to go back in time. Firstly I would like to go back to the court of Henry the 8th and observe all the political intrigue of the time. I would like to meet his first two wives and have tea with them both and get to know what they were really like. Then I would like to meet Elizabeth the 1st for tea and cake and ask her what scared her most about being in charge of the country. From there I would like to jump forward to the French Revolution and meet Marie Antoinette. Then I would jump forward again to spend some time with Emmeline Pankhurst during her fight for the right for women to vote. I would be keen to talk to her about her achievements and whether there was anything she would have done differently. I would finish my historical tour by joining the men as they landed on the moon.