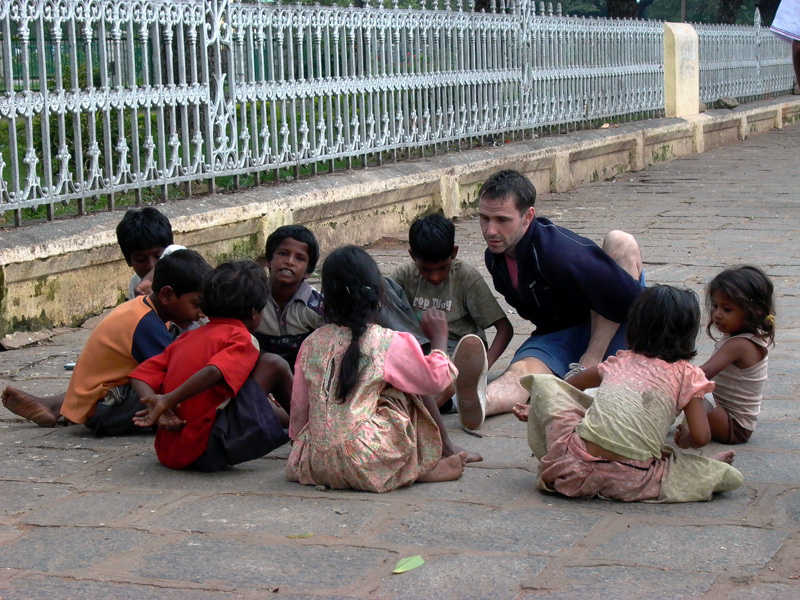 As students of yoga, we easily associate Mysore, India with Ashtanga Yoga and studying the practice. This is a powerful journey and one that our own Matt Ryan has experienced many times, but there is another side to this city.

Take a walk down the busy city streets of Mysore and, chances are, a soiled, bare-footed child will approach you with hands outstretched, begging. Her real age is eleven but she looks more like a seven-year-old from years of malnutrition and living on the streets.

Her mother has also spent years on the street, likely abandoned by her husband. Together, they survive day by day, begging for meals and sleeping on the sidewalk. The government often comes to throw away their belongings that they store on the street.

While visiting Swamiji, or the Cave Swami, as the yoga students fondly refer to him, Matt was fortunate enough to meet those involved with a very important charity, Operation Shanti. Formally established in 2005, Operation Shanti is a non-profit organization whose mission is to directly improve the lives of exploited, at-risk, destitute children and their families, enabling them to break the cycle of poverty.

Operation Shanti’s first efforts began in India eight years ago in 2005 and were focused on basic needs – providing daily meals and medical assistance to those living on the street. This became Project Street. During his many visits to India, Matt often spent time with Project Street, teaching the children yoga (see photo above of Matt teaching the kids Marichyasana A), handing out food, and taking them to the doctor.

In 2008, Operation Shanti opened the Karunya Mane shelter (which means “House of Compassion for the Poor” in the local language) on the outskirts of Mysore to provide the street children with a permanent home. Currently, 45 children live at Karunya Mane full-time and receive a good education, medical care, and nutritious food. This is Project Home.

In September 2009, Operation Shanti expanded its efforts once more and began distributing care packages to destitute families affected by medical hardship. This is Project Food & More.

Matt and Yoga Manchester have continued to support Operation Shanti through various fundraisers over the years and being hands-on when in Mysore. The organization is very close to Yoga Manchester’s heart and we encourage you to get involved.

How you can help…

Forever a student – and that’s what makes it Wonderful!